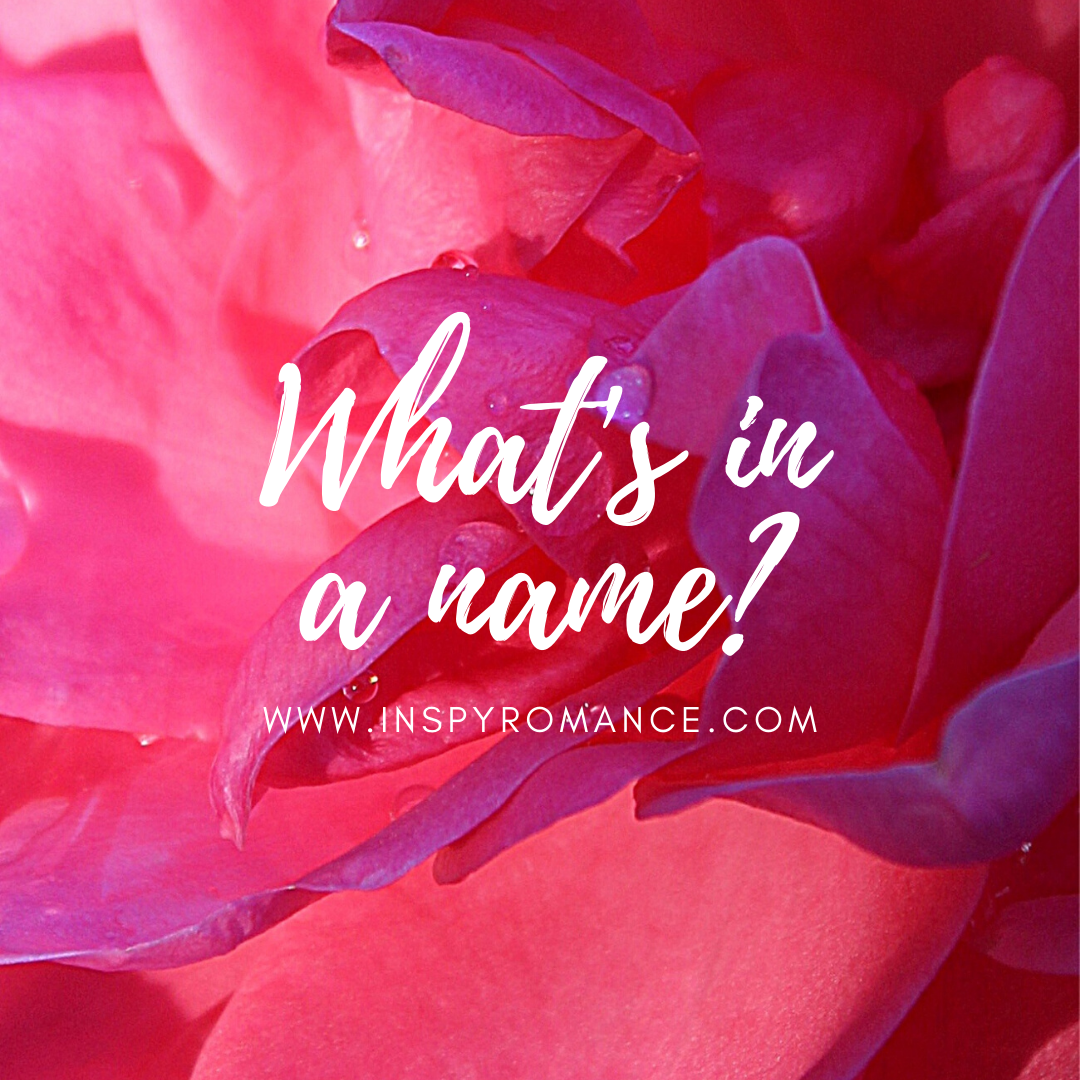 In high school, I ran our Shakespeare Troupe for three years (I was just a regular member Freshman year.) We were a group of goofballs who loved all things William Shakespeare. But, more than that, we put on his plays and competed in the local Shakespeare Festival that was held at the Folger Shakespeare Library in Washington, DC.

There was something amazing about being on that stage. It was also a delight to sit in the audience before and after our turn to watch as other high school troupes put on their performances.

And so it is that every time I’m sitting, tapping my fingers on my keyboard trying to come up with a name for another character in one of my books, I find myself muttering along with Juliet, “What’s in a name? That which we call a rose by any other name would smell as sweet.” Of course, being also a big fan of Anne of Green Gables, I often will also mutter afterwards, “I don’t believe a rose WOULD be as nice if it was called a thistle or a skunk cabbage.”

Naming characters, for me, is hard. And somewhat horrible.

See, in real life, I’m not a huge fan of giving kids crazy out there names. But in fiction? Not everyone can be named John or Luke. And heaven forbid if you should have two characters whose names start with the same letter in one book! (No, it doesn’t matter if you can list six families you personally know who named all their kids with the same first letter. That’s frowned on in fiction. Plus it makes it hard for the author — you’ll mix them up inadvertently. Just ask June and July in my Remnants series.)

I think I’ve done okay, though if you’re paying close attention you may notice that I apparently have an affinity for J names. (Seriously, so many of my characters start off with a J name and then I have to change it because not everyone in the world can have a name that starts with J!)

Authors who are smarter and more organized than me keep a spreadsheet of all the names they use. It’s such a fabulous idea! And I always mean to implement it…and then I don’t. I really do need to go back through my books and do this, but it seems like such a monumental task, and which names do I include? I mean, in Hope for Tomorrow there’s a character with an ex-wife. She gets mentioned exactly one time. Does that mean I can never use that name for a main character in some other series without people thinking I mean the ex? (Honest question there — are you the type of reader who’s going to wonder if that’s what I’m doing?)

And so, having worked my way through the initial glut of accessible and more common names, I find myself with the Hewitt family. The parents, Martin and Elise, decided (for who knows what reason!) to name all their children after a shade of blue. So I have Azure, Cyan, Indigo, Royal, and Skye. Some of them are more “normal” names than other…but I’ve even gotten a couple of frustrated comments from readers who disliked the fact that I have a Skye when Heather Gray also has a main character Skye (and her eponymous book is a fantastic story btw, if you haven’t read it.)

But as an Elizabeth, let me just tell you, duplicate names is a thing. ;)

Still, I try hard to make sure I’m not using the same name as another book that’s releasing around the same time, or is not the exact same name as another CCR writer used somewhat recently. And while I do sometimes include names of people I know as a little wink and a nod, I try to avoid making a friend’s last name belong to the bad guy (Ahem. Valerie Comer’s Neil Maddrey in Sweet Serenade is just misunderstood!)

You can see the problem. 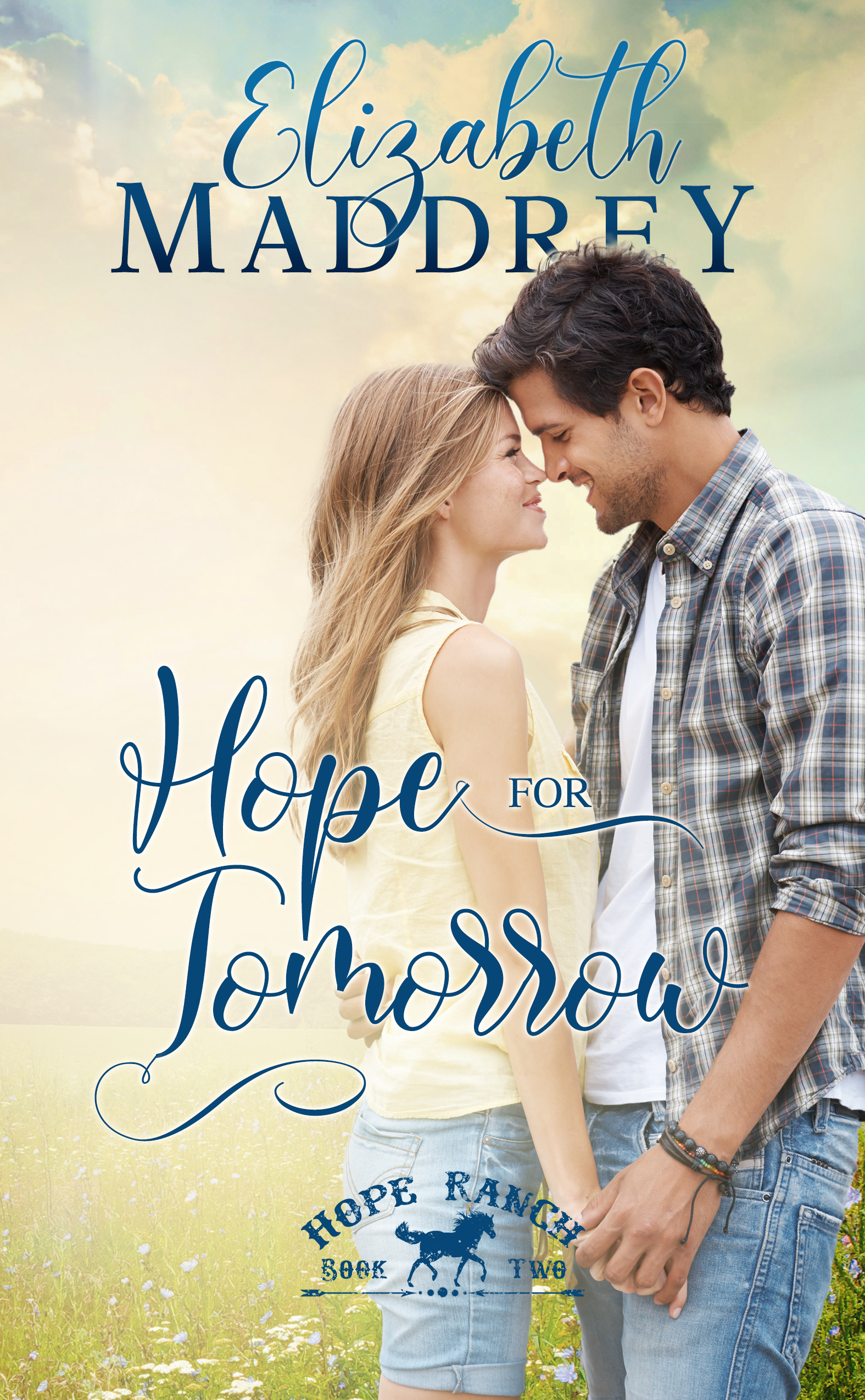 In Hope for Tomorrow (Hope Ranch book 2), we meet Skye Hewitt and Morgan Young. Now, as it happens, I have a cousin named Morgan. His last name is not Young. And other than also having been a cop at one time, fake Morgan and cousin Morgan have basically nothing in common. But even so, when my sister heard that was the name I was using, she was concerned.

Concerned enough that I tried to change his name. I really, really did.

But here’s the thing…once a character starts to come alive for me, it’s crazy hard to change their name. I have, in fact, only managed it once. In A Heart Rearranged, my florist was supposed to be Violet, but my editor went on (and on. and on.) about how it was too cutesy to have a florist with a flower name. So she became Vanessa. But the process of getting my brain around it was excruciating.

So I went back to my sister (she knows our cousin better than I do – long, weird story full of family drama) and sent her the first bit of the book to see if she could tell it wasn’t real Morgan.

She gave me the thumbs up. (Phew!)

Because no matter what my pal Willie S says through Juliet, I tend to fall more on Anne’s end of things: names matter. Especially once someone (real or fictional) has started to come alive in my brain. I can’t just turn a skunk cabbage into a rose with nomenclature.

So let’s talk names…do you mind when books by different authors have characters with the same or similar names? Do you have a name you don’t tend to see in books that you wish you did? (Cause I always need new name suggestions!) When it comes to names, are you team Bill or team Anne?

Leave a comment by midnight on Friday (4/17) and one person will chosen to receive a copy of Hope for Tomorrow (which if it isn’t out, should be any minute now) or, if you have that, your choice of my books.