Typing the title to this post, my brain flashed to that scene in Miss Congeniality, you know, this one?

I enjoy that movie. But that scene is probably one of my favorites. The weather certainly factors in to a perfect date, don’t you think?

But, all kidding aside, I’m at the place in my current work-in-progress where I’m getting ready to (finally!) send my hero and heroine off on their first date, and David (the hero) is struggling with what to do. He’d like to do something out of the ordinary–something different than dinner and a movie. Sadly for David, his author is currently at a bit of a loss. He even went so far as to ask his sister about it. Here’s how that conversation turned out. (And…pardon the dust, it’s not fully edited, still being my work-in-progress.)

David’s sister opened the door wider and gestured for him to come in. His oldest niece, Madison, a precocious six, raced by shrieking at the top of her lungs. Her little brother, Jeremy, zipped after her, hit the hall rug and slid into the wall before setting off a wail that could peel paint. “Welcome to bedlam.”

“Maybe this is a bad time. I can call you later. Or something.” Maybe he could ask a friend. He just hadn’t wanted to get in to everything…deal with all the questions that would come. Ji already knew about Jen.

“Oh, no. You’re here. Come on.” Ji scooped up his sobbing nephew, cutting off the noise immediately. The four-year-old snuggled in and beamed a watery smile at David before reaching out.

David took the boy and grunted. “You’re getting heavy.”

“That’s right.” David kissed the boy’s forehead before setting him down. “Are you going to let your sister get away with that?”

Jeremy shook his head vigorously and tore off in the direction his sister had disappeared. Madison’s shriek pierced the temporary silence before Min’s voice cut it off again.

“Aha, now their dad’s on the case. He’ll, hopefully, wrangle them into pajamas and start getting teeth brushed. What brings you out here on a weeknight?” Ji followed the hall to the kitchen and began rinsing dishes. The dishwasher was already open and half-loaded. He must have interrupted the chore.

David hopped onto a stool at the island and crossed his arms. “I asked her out.”

“Lunch with a coworker isn’t really the same thing. You know that. I asked her out on a date. A real one.”

Ji grinned and closed the dishwasher, then rinsed her hands and dried them. “That’s great. I liked her, by the way. A lot. So when’s the date?”

“Friday. And I have no clue. I haven’t been on a first date in…a long time. What do I do?”

“Seriously?” Ji shook her head and took two mugs out of the cabinet by the sink. She filled them with water and put them in the microwave. “Out of idle curiosity, why are you asking the sister who’s been married fifteen years? I haven’t been on a first date in a lot longer than you.”

It was a fair point. But…”You’re a girl. Don’t you have stockpiles of date ideas stashed away somewhere?”

“I think at this point she prefers the term ‘woman.’” Min pulled out the stool next to David and sat. “But if you do have a date idea stockpile somewhere, you should package it, sell  it, and let me retire. I’ll be a stay-at-home dad and even toss in vacuuming every now and then.”

David frowned. Min was a super programmer. He’d been doing a lot of proposal and grant writing lately. He was good at it, but apparently hated it. “I…might actually have a possible solution for you. I have a team-lead position that just opened up. There’s still a decent amount of development involved, though you’d have management tasks, too. I’d need to make sure there wasn’t a problem with you being my brother-in-law. Well…that’s assuming you didn’t have a problem with it first.”

“Send me some details. I’m not immediately opposed. And at the least, maybe knowing I’m actively looking at another option will convince them to hold to their promise that this was temporary. Who’d you ask out?”

David blew across the top of his tea before sipping. “Jen. Didn’t Ji tell you about her?”

Min nodded. “Just making sure. What’s wrong with dinner and a movie? If I recall, that was our first date. Things seem to have worked out okay.” 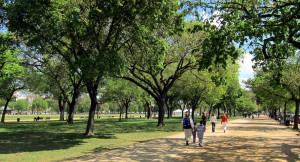 Ji got her mug from the microwave and leaned against the island. “Or you can do dinner and something else. The weather’s been pretty good, you could try a walk downtown. The Mall’s pretty in the evening.”

“I guess. I was hoping for something more, I don’t know, creative? Unique? I want to make an impression.” 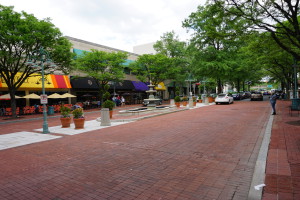 “What about Shirlington? Good restaurants, nice place to stroll and window shop. And you could check the theater there and see if there’s something live going on, comedy or some such. That’s a little more interesting than sitting in a dark movie where you can’t interact.” Ji pulled the tea bag out of her mug and then out of David’s. That was probably why it was starting to taste weird. He never remembered to take the things out.

“All right. I’ll look into that. Thanks. Where are the minions? They’ve gotten quiet.”

Min sighed and stood. “I should probably check on that. They’re supposed to be getting ready for bed. They’re probably playing. Good to see you, David. Let us know how the date goes.”

David watched his brother-in-law take the stairs two at a time before turning back to his sister. “He doesn’t really care about my date, does he?”

“Maybe he wants me to stop talking about how I wish you’d find a nice girl and settle down. I don’t know.” Ji shrugged and moved around to sit on the stool her husband had vacated.

David chuckled and took a long drink of tea. It was nice that his sister cared. Mostly. At least she wasn’t pushy like his mom could be. Though again, it was hard to mind too much when you knew they just wanted the best for you. Soo-Yi had not been what’s best though, and he’d known it long before he’d had to guts to break things off with her. She’d known it too—had told him as much. The pressure to get married though…it got heavy.

“Nothing, really. It’s nice that you care.”

“Why wouldn’t I care? I’m your older sister.”

“But you were out of the house by the time I was what, ten? It’s not like we were buddie growing up.”

Ji slung her arm over David’s shoulders. “Maybe not, but we are now. Right?”

He chuckled. “Sure. But only because your kids say I’m their favorite uncle.”

She laughed and swatted his arm. “Go home. Don’t stress the date too much. I have a feeling that whatever you decide is going to be great.”

First dates are a big deal! You don’t want it to be something where there’s no possibility of conversation. So that rules out lots of things (like movies!) but at the same time, don’t you want it to be awkward or boring. As a result, a lot of my characters go on dinner and a walk kind of first dates. Around here there are, at least, some very pretty and unique places to stroll and window shop, so that helps some. But I can’t help feeling that I’m wriggling into a bit of a rut.

I really don’t want to be in a rut.

And so I’m turning to you for help. What’s your ideal (first) date? (I put the first in parentheses because it doesn’t have to be first date material only, I’ll take whatever suggestions you’ve got.)

As a bonus, I’ll choose one person who comments before March 31st to choose something from any of my current collection of ebooks.