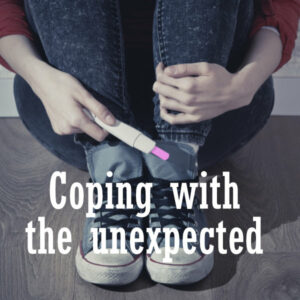 I went to an old-fashioned all-girls’ boarding school, founded in 1905 by British missionaries in Africa. They believed the best way to establish Christianity was to give girls a solid grounding in the principles of the faith, so that they would raise their own children under the same beliefs.

When I was there as a teenager in the late ’80s and ’90s, Christianity remained the bedrock of the school’s foundation. We had strict rules of conduct, and we were still being trained to have an impact on the nation and the next generation.

But sometimes that “next generation” came along a lot earlier than expected.

About twice a year, the entire student body would be summoned for check-ups with the school nurse. They’d be screening us to check if anybody was pregnant. One by one, we’d go into the exam room at the sick bay. The nurse would palpate our abdomens and ask us rather embarrassing questions about our cycles. Girls found to be expecting were expelled immediately.

Twice a year, there would be one or two hurriedly vacated desks and beds left empty in the dorm rooms. These girls wouldn’t even get a chance to say goodbye to their friends. They’d just be hustled away. I always wondered what became of those girls whose lives and plans were derailed by an unexpected pregnancy.

In my latest book, Hidden in Her Heart, I explored those questions. What happens when a brilliant student and a committed Christian slips up and finds herself pregnant at sixteen? The pregnant teen isn’t the main character in the book. But her story is a key driver of the plot.

One reviewer called it “Romans 8:28 in action,” saying it shows how God can bring good even out of our mistakes. I was thrilled to hear those words, because that was my intention in writing the story. I wanted to dig into the lives of people who have messed up and got it wrong, but still find that God meets them with grace and incredible blessing when they put their trust in him.

I don’t know how the stories of those girls expelled from my school unfolded. I have no idea how their families supported them, or what they eventually did with their lives. But I think of them now and then, as well as the many other teens who find themselves in trouble.

While I don’t mind reading light-hearted books and enjoy a good laugh-out-loud comedy, I’m drawn towards writing stories that deal with tougher issues. Do you like Christian fiction with grit? Or do you prefer to escape into stories that tickle your funny bone? I’ll be giving away an electronic copy of Hidden in Her Heart to one randomly chosen commenter who drops a line by Monday April 19th.

Even if you don’t win this one, Falling for the Foe, the first book in this series, is free on all online retailers. In that book, I centred the plot around another serious issue from the country of my birth. Because I can’t seem to stay away from the tougher topics! But as always, there’s a happy ending.