This year I started releasing books in my Taste of Romance series. The series, as a whole, is designed to touch on food-related issues that we, as Christians, should know about and prayerfully consider our involvement in. First, and foremost, however, they’re contemporary romance. And if you don’t want to think about anything while you read them, I’ve been told by a number of readers that the books are still very good rainy-day reads.

When it got time to release the first in the series, A Splash of Substance, I talked to the person who always did my covers at the small press that published me and we worked it out for her to do my covers. I’ve always been very pleased with her work and, as we kicked around ideas, we came up with this. 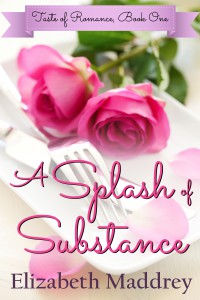 I love this cover so much. It hints at the conclusion of the story (which involves a fancy catered dinner and flowers.) Those roses are, to me, insanely romantic. I look at the cover and I’m just happy. So I hit publish, did the usual promo I do and the people who’ve read it all have lovely things to say about my feisty caterer, Paige and the hunky Senator’s Aide Jackson. But it doesn’t seem to be catching the eye of the random browser.

Ok. No big deal I think to myself. After all, it’s the first in a series and it’s not as if I’m a big, household name. We’ll give it some time. And so I did and I worked on getting book two in the series, A Pinch of Promise written, edited, and ready to publish. I went back to my cover designer and given the start of branding we had with Splash of Substance, we decided to see if there was something similar that would make it clear that we had a series going. And we came up with this lovely creature over here on the right. 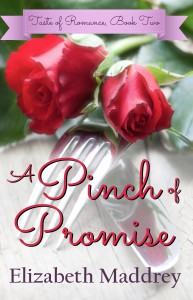 I’ll admit it – I love this cover too! The roses! The fork! (Food-related, remember?) And again it hints at an important scene with the forks and flowers. Plus, the two of them go so well together.

Again, the people who’ve read it have had lovely things to say about the story. Rebecca is a flawed but relatable girl and Ben is a strong, man who knows what he wants and is going to convince her to go along. But still not really catching anyone’s eye.

So I talked to some of my author friends. And my reader friends. And really anyone who’ll listen and slowly it comes out…my covers that I love? They’re the problem. Romance readers prefer people on the covers of their romances. Now, at this point, you’re probably nodding your head and wondering why I’m so dense I didn’t know that. But it’s not that I didn’t know…I just really had hoped there would be some wiggle room. Cause finding people that are right for the covers is right up there with getting my eyebrows waxed. (So you completely understand how much I dislike looking for people for my covers, you probably need to know I’ve had my eyebrows waxed exactly one time in whole life. And I have no plans to ever do it again unless I develop a Bert-like unibrow.)

But alas, people like people (there’s a song in there). So off I went to begin the cover design process anew. With people! And a scene that somehow represented the novel! And you know what? I found some and it was slightly less painful than I’d anticipated. So I dusted off my rather rusty graphic design skills (such as they are) and did some playing and some tweaking and some collaborating with people’s whose opinions I value and….voila! 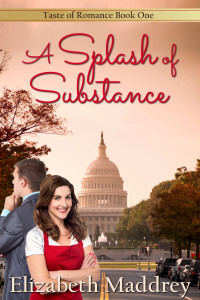 I’m very pleased to reveal to you the new cover for A Splash of Substance. I have to say…I really love this cover, too! (This is a huge relief to me, because I was worried I’d not be able to get over the roses. And while I knew the covers needed to be changed, change and I are not the best of friends.)

I’ll even admit that you can get a pretty good sense of the story from the cover now without having to have read it. (Or written it.) And really, isn’t that what we’re going for?

Encouraged by my success with book one, I went back trolling for pictures of Rebecca and Ben. This was a little harder but I did, at last, find folks who were suitable. More playing and tweaking (honestly, book two was more difficult to do than book one. Why? No idea.) and, at last, a new cover for A Pinch of Promise! 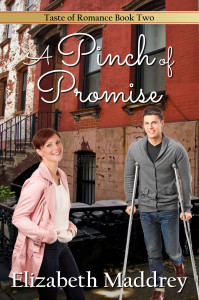 With this one, I went back and forth a little about where the people should be. Should they be next to each other like in Splash? Or…at the end of the day, I decided I liked this way a bit better than what I could do with the crutches in any other position. And there’s still some coherency between books in the series. Maybe not as much as there was, but I’m not sure that’s a bad thing.

And now you know what authors do when covers go wrong. Well, if they can. I do think that people taking a look at the new covers are likely to be intrigued enough to look deeper and at least read the blurb.

What do you think?