Have you ever had God ask you to do something you thought you were totally unequipped for? That’s how I felt when He called me to write.

I’m an avid reader from way back, but I never aspired to write, never even kept a journal. But I am a dreamer. I could spin a story in my head like you wouldn’t believe. Looking back, I wonder at the fact that I never felt inspired to bring those stories to life. I believe it was because the timing wasn’t right. God’s timing. He had other things He wanted me to do first.

I was told at a young age that I wouldn’t be able to have children. I started praying then that I would have kids and that they wouldn’t have the rough up bringing I had. My husband and I married at a young age, and God blessed me with three miracles. I’ve had odd and end jobs–mill worker, truck driver, bookkeeper, tax preparer, garage manager–but my main objective was raising those blessings, so that’s what I did.

Our plan had been to travel after that. I thought maybe I’d like to take some college courses, though I had no idea what subject. I can tell you it probably wouldn’t have been related to literature. Math was always my thing. Then my husband became seriously ill. The man had never even drunk one beer in his life, and he ended up with cirrhosis of the liver.

That’s what He kept saying to me. Then I asked, what sheep? And, how do you want me to feed them? Writing was His answer and it floored me. The important thing is, I was willing.

Here’s the thing about God asking you to do that thing you feel unprepared to do, He will supply what you need. I didn’t have a clue what my first book would be about. He supplied the inspiration. He has sent me a cover designer, editors, critique partners, educational resources, and the list goes on. All of it stuff I had no clue was needed to produce a book, but He supplied it. 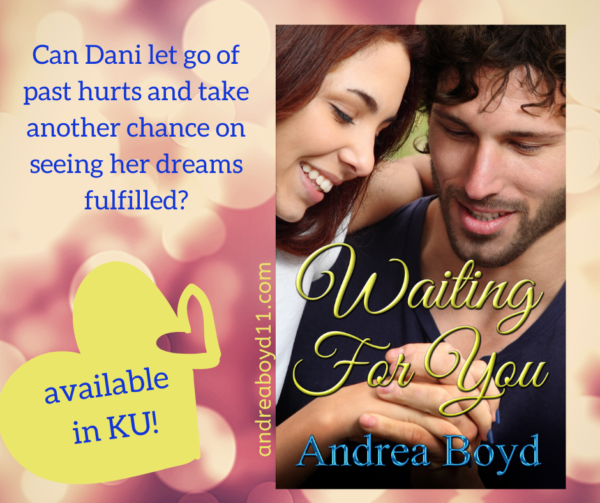 I now have ten books behind me and I’m still writing. My latest is titled Waiting For You and that’s the eBook I’ll be giving away to one of you lovely commenters. Be sure to check out Sunday’s (4/26) post to see if you won.

Waiting For You is about Wade, the oldest of the Spencers. Since the death of his dad, Wade has held all the responsibility that goes along with taking care of his family and the farm. He hasn’t had time to even think about dating. Then Dani shows up with her broken dreams and a daughter in tow. Could she be the one God has in mind for Wade’s future?

I hope you all have a blessed weekend. I look forward to getting to know you better here at InspyRomance!