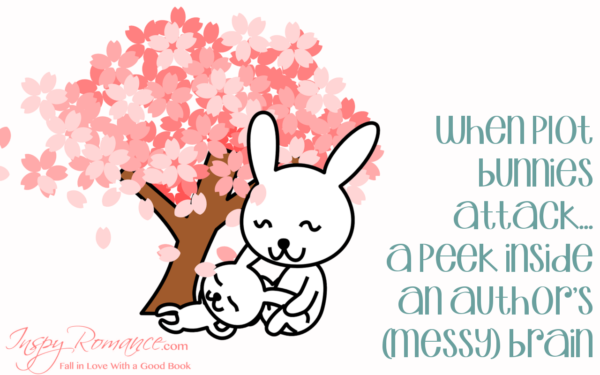 Plot bunnies. Those story ideas, scene fragments, characters, or images from a yet-to-be-written story that nag nag nag to have their story written RIGHT NOW and won’t leave us alone to focus on the story in progress. They look cute and fluffy and friendly, but oh boy, they can also be trouble!

“Ideas are like rabbits. You get a couple and learn how to handle them, and pretty soon you have a dozen.” — John Steinbeck

He only had twelve? Lucky guy!

My brain teems with story ideas. And they really do multiply. My new story ideas never come one at a time, they come as entire series. And far too often, they distract me from the story I should be writing.

I suspect that’s a sneaky procrastination method. “But I am writing.” Hmm, nice try, Ms. Procrastinator! Or could be, it simply happens because my brain is set to creative mode. They do attack more when I want to be writing something else. But whatever it is, it’s about as welcome as a family of hungry rabbits moving into my veggie patch!

I should be finishing up my stories for the wonderful A Tuscan legacy multi-author series. I’m already a little behind where I hoped to be by now with my books, set in Wales and Tuscany. I love the series. I love the stories. I love my characters, especially Rachel and Jonathan, who you’ll meet in book 1, Marion’s That’s Amore, the one you heard about on Thursday. They’ll reappear for their own story in Book 8, Dolce Vita (Sweet Life), and appear again along with all the cousins in book 9, La Risposta (The Answer).

Yet I keep getting pulled out of their story world by other ideas, insisting I write them down. This week’s plot bunny attacks have included: