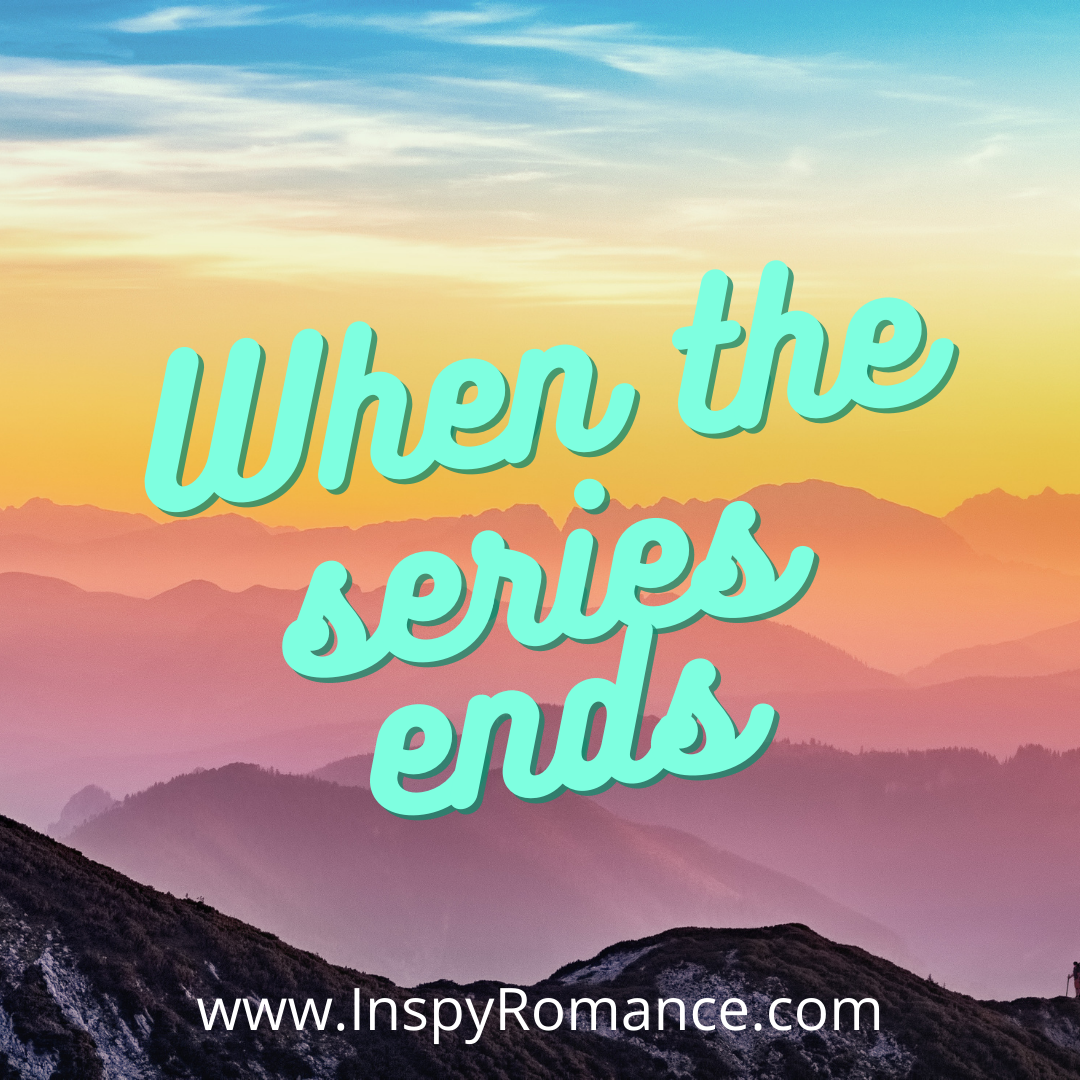 They say that all good things must come to an end.

I know as readers, that’s hard when the good thing in question is the series that we’ve been gobbling up. We’ve grown attached to the characters and the setting and everything about that series that kept us drumming our fingers wishing the author would hurry up and get that next book out!

Although, I’ll be honest and say that there are not very many series where I will stick around past the 6-8 book mark. Valerie Comer has some longer series that have held my interest past that point. I have read a couple of secular police procedural series that are well past 30 books that I still snap up. But generally? Six to eight is good for me.

As an author, I hate to admit, but often when I reach the end of a series, I’m ready for it to be over.

Maybe even for the same reasons readers are disappointed.

All the hours spent with those characters, in that setting, sometimes leave me dreaming of someplace new. A new character, with mysteries yet to be discovered.

I find that writing that final book can be a challenge, because half of my brain is already drifting into the what ifs of the next new thing, and so I have to drag myself back into the present to make sure I do justice to those final characters.

I never want to have the last book leave readers disappointed.

Tomorrow, the final book in my Hope Ranch series releases. Writing Hope at Last was different for me — on a number of levels. The characters are older. They’ve had a full life, filled with love and marriage and are now looking at love a second time around. That was all new for me. And the newness? Kept my mind from wandering. 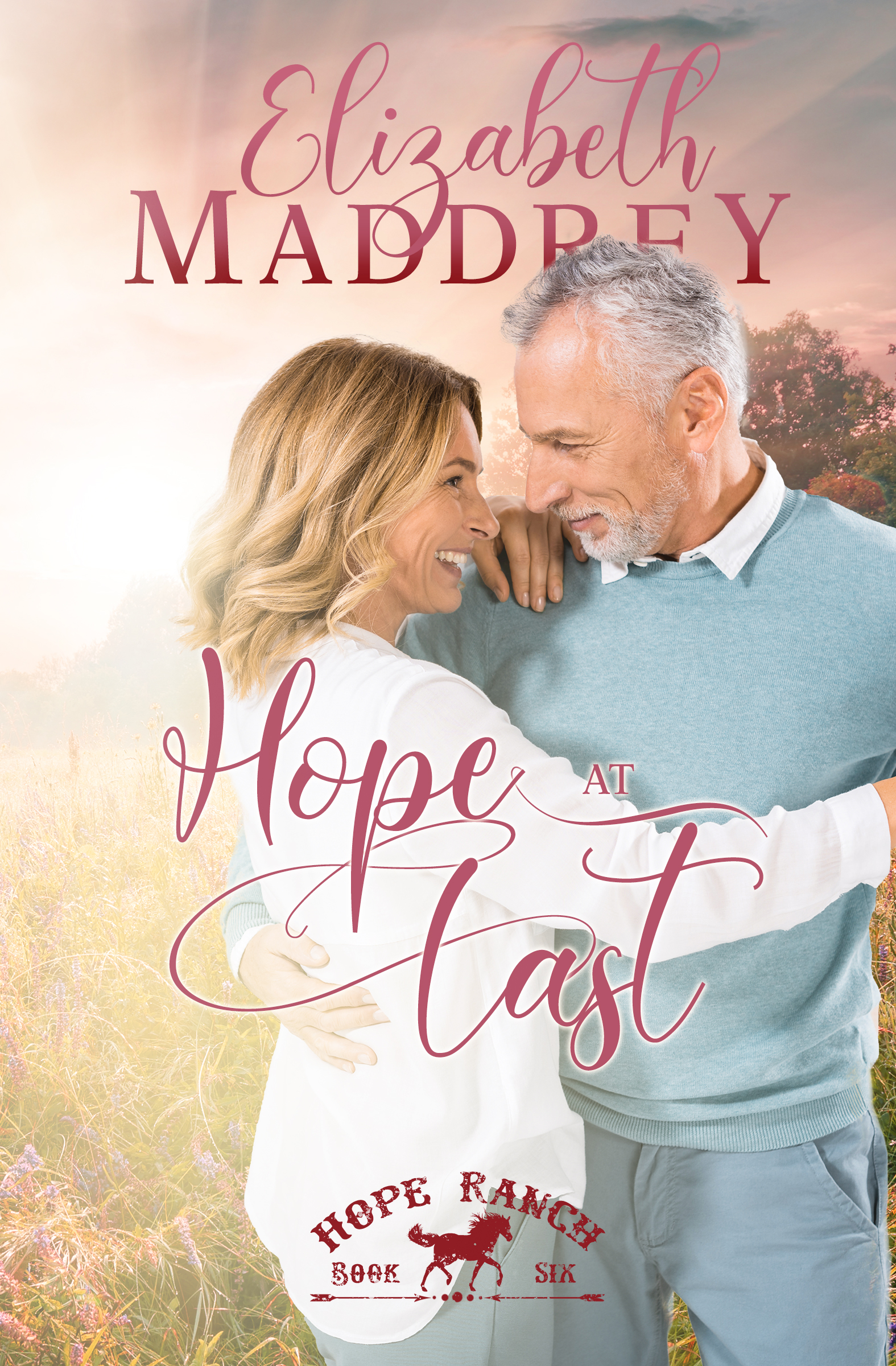 I had so much fun with this final installment in Hope Ranch and I hope that readers who have been following along are looking forward to seeing Elise, the mother of the Hewitt siblings who have featured in previous books, find love again.

The question, though, was what type of man to give her.

Elise is new to her faith. She had a less than amazing relationship with the father of her children. And she’s firmly convinced the only thing ahead for her is time with her children and grandchildren.

Enter Dave. He married the love of his life and has been floundering since he lost her. And he’s in full time mission work–the same work he and his wife did all their years together.

In addition to nudging Elise and Dave toward their happy ending, I knew I needed to make sure there weren’t loose ends hanging that would make the series end unsatisfying. So we see the Hewitt kids and their new babies. We even take a little trip to Peacock Hill to touch base with Azure Hewitt — the Hewitt sibling who started it all.

So, while all good things must come to an end, it’s my hope that the end of the Hope Ranch series leaves readers with a long, happy, contented sigh.

A widow, a widower, and some matchmaking daughters.

Elise Hewitt came to Hope Ranch because there was nowhere left to go. She’s making a place for herself by helping with her daughter Indigo’s yarn business and watching her grandchildren, but neither of those things ignites any passion in her heart. Maybe she’s just too old for that.

Dave Fitzgerald’s call to the mission field is all he’s ever known. Now that he’s a widower, he’s more involved than ever before. Running a camp for young adults considering full-time missions is a break from the trouble-shooting assignments he usually seeks out, but a summer in the mountains of New Mexico isn’t any kind of hardship.

When Elise’s daughters get a look at the handsome older man, they begin to conspire to throw the two of them together. Everyone else in the family has found love at Hope Ranch, why shouldn’t their mom have a chance at love a second time around?

If you pre-ordered, your copy of Hope at Last will hit your Kindle tomorrow morning. It’ll also be available in Kindle Unlimited tomorrow if you’d rather read it that way.

I’d love to gift one US commenter a paperback copy (or an international commenter an e-copy) of Hope at Last. Do you love long series? Shorter ones? Or, let me know how you feel when series end to enter. I’ll choose a winner on Saturday morning.