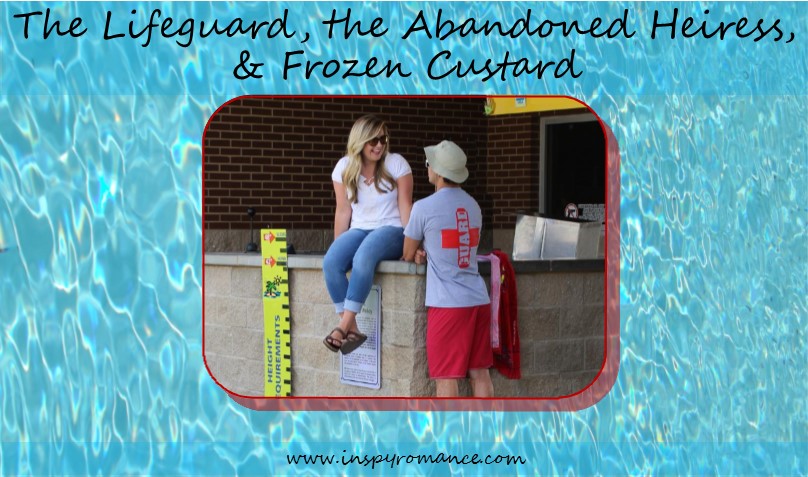 Hey, everyone! I know you’ve seen the Whispers of Love boxed set mentioned around here a bunch and today it’s my turn! My novel is The Lifeguard, the Abandoned Heiress, & Frozen Custard. It’s book 2 in my Serenity Landing Lifeguards series (book 1 was in last year’s SPLASH! collection and is available as a single). 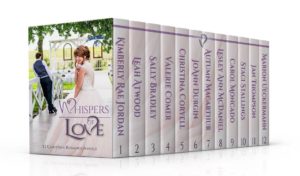 Today, I’m sharing the opening scene from Lifeguard and be sure to preorder your copy today if you haven’t already! It’s over TWO THOUSAND pages of new stories from twelve authors! At only .99, it’s a steal! Plus the set will only be available to purchase for a limited time, and the price will go up not long after release, so get it soon!

Without further ado… Adam and Gwendolyn…

Adam Wilkerson looked up from his phone. Was she talking to him? He glanced around the entry of the Serenity Landing Rec Center. Sure enough. The front desk gal had left. When had that happened?

“I. Need. A. Job.” Her exasperation came through loud and clear.

“Then why are you sitting here?”

He took a mental inventory of the girl. Blondish hair. Likely found in a bottle at a salon. It was too early in the season for it to be that sun-streaked. Blue eyes hidden behind glasses. Perfectly applied make-up. A filmy top that likely cost as much as half his wardrobe. And those fancy white tipped finger nails.

What was she doing looking for a job?

One of those fingernails tapped an annoying beat on the counter.

“Right.” He looked around the desk for an application. “You want a job.”

Because there were just tons of those jobs lying around. “Uh…” He didn’t see an application. “You’ll have to wait for Kaitelyn to get back. I don’t know where the paperwork is.”

Was that a sneer on her face? “Then why are you up here?”

Two people he recognized walked in. “Hey!” he called. “Meeting’s been moved upstairs.”

They both called their thanks.

“I’m directing them to the SLAC meeting.”

“SLAC?” she asked, almost to herself. “The aquatic center? Why do they have meetings here?”

“It’s our orientation. There’s not exactly a conference room at the pool.”

“Oh. You work for SLAC?” She seemed deflated somehow.

“I have no idea what that means.”

Adam shrugged. “Kind of like a shift supervisor, I guess.”

Before either one could speak again, Kaitelyn came back. “Can I help you?” she asked.

The girl immediately turned her attention to Kaitelyn. “I need a job.”
Kaitelyn gave her a sympathetic look. “Sorry. We’re not hiring right now.”

Adam sank back to his chair. No longer his problem. The slightly haunted look in her eyes would stick with him for a while though. Did he know her? She knew what the aquatic center was. Could she have spent time there over the last few years?

He looked up to see Alivia waving him over. She wasn’t just his boss, but also a good friend. He’d even thought, briefly, about asking her out the summer before – until CJ showed up and stole her heart. He was happy for them, even though it meant he was the last one of the older guards without a significant other. “What?” he hollered back.

“Have you seen Patty? She’s not upstairs.”

Adam shook his head. “Nope. Haven’t seen her. I thought I heard she moved though.” He was friends with her older brother. Hadn’t Peter said his dad got transferred to Ohio?

The thought went through his head just as Kaitelyn spoke. “Livs, this young lady is looking for a job.”

Oh, please. Kaitelyn was at least a year younger than the other girl.

Alivia glanced at him, and he shrugged. He knew nothing about this girl. “Uh, sure. Kaitelyn, can you get her an application? Come on up to the meeting and fill it out. We’ll talk afterward.” She looked back to Adam. “I think that’s everyone else. Come on upstairs so we can get started.”

Adam went through the back room, talked to the director for a second to let him know the meeting was starting, and out the other door into the lobby to find the girl standing there. Was she waiting for him? Her weight shifted from foot to foot, and she wouldn’t meet his eye.

“For what?” He started for the stairs.

“I was kind of rude to you, and I shouldn’t have been.”

“Kind of?” He couldn’t stop the words from coming out and immediately regretted them. “Sorry. Apology accepted.” They started up the stairs. He held his right hand across his body. “I’m Adam.”
She ignored it. “I figured that out when the other girl yelled at you.”

“That’s Alivia. She’s in charge of the aquatic center.”

He stood to the side to let she-of-no-name enter first. Maybe he should make one up for her. Before he could think of one, he did a double take. “Hoppy?”

His old friend turned around, a grin on his face. “Hey!”

“What are you doing here?” He held out his hand again, knowing it would be taken this time.

Hoppy grasped it and gave him a man hug. “I moved back last week. Livs hired me.”

“Moved back? What happened to…” Adam froze, not remembering the name of Hoppy’s fiancé.

Right. Instead of pressing his friend for more information, the two of them sat on a table at the back of the room as Alivia called the meeting to order. The new girl took a seat in the back. By herself.

Adam felt a little bad for her.

The glare from Alivia shut them both up as she held up a schedule. “The first lifeguard training is in two weeks. The water will still be cold. You’ll have to deal with it. This year, we’re going to bring in some of the swim team kids to be our rescue dummies.” She glared at Adam again. “Because we all know Adam can’t convincingly pretend to drown.”

“Hey!” He pretended to take offense. “I was a very convincing rescue dummy.”

She rolled her eyes and moved on, but Adam noticed she-of-no-name staring at him.

What was that about?

So there we go! Who’s the girl? Why is she so desperate for the job? Find out June 28!

And, of course, a giveaway! Anyone who follows me on social media knows that my happy place during the summer is at our local Aquatic Center (who kindly let me do cover pics there!) – but what about you? Do you have a special happy place that only works in the summer time? Anyone who comments before noon on June 11 will be entered into a drawing to receive a copy of Whispers of Love once it releases!

Today also turns out to be our first swim meet of the summer! So I’ll be around, but not until later today :). 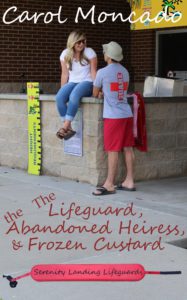 Adam Wilkerson is a lifeguard at the Serenity Landing Aquatic Center, and looking forward to a summer of fun and freedom before settling into adult life. The sudden appearance of a young woman with secrets, but who somehow manages to stir in Adam emotions long dormant, threatens to change his summer plans.

Gwendolyn Cranston-Schmidt is looking for a fresh start, and her one hope at help – her cousin – is unavailable. Time to find a job and a place to live. For a girl who’s never worked a day in her life, the struggle is real. Plus, her secrets are going to find her out, sooner rather than later. What she didn’t plan on was a cute guy who easily finds his way past her protective barriers.

Adam and Gwendolyn find themselves spending more and more time together – and sharing their secrets. Can they find a way to get beyond both of their pasts – or will their pasts come back to haunt them before they can move forward together?