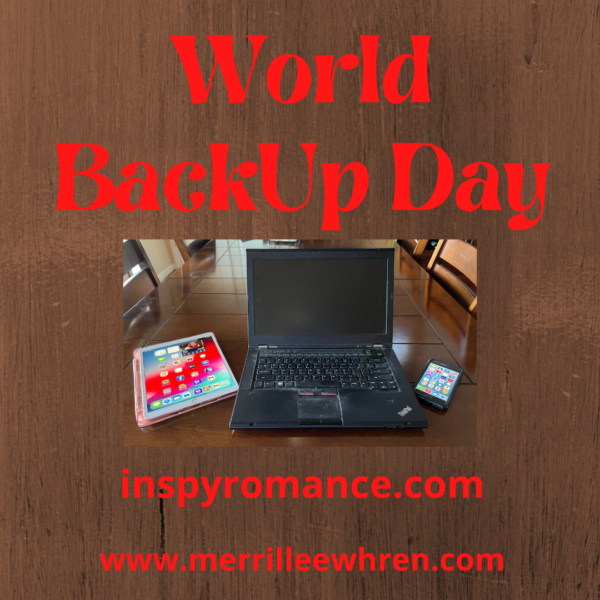 Today is World Backup Day. Remember to backup all of your devices on a regular basis. You don’t want to lose that precious data.

What is one of the worst things that happens to a writer? I would say the loss of all your data. Books, files, covers, research, hours and hours of work. Gone! Just like that!

When I first started writing, I wrote either longhand in a notebook or typed on a typewriter. If I would have had to finish a book using either of those methods, I probably never would have submitted a book to a publisher. I was always an inaccurate typist. I remember typing college papers and hoping not to make a mistake that I would have to correct with whiteout or correcting tape. Horrors!

Then a computer came into my life. My husband brought home a portable computer, and my typing mistakes could easily be corrected. You would laugh when I say portable. It came in a suitcase about the size of the carry-on roller bags we use today. It had a five inch floppy disk that held the file. I had to use more than one disc for a whole book. At that time we had no email or internet. There were no cloud backups. If any backup system existed, I didn’t know about it. One night while I was writing, my husband decided to fix something electrical and didn’t tell me. He turned off the circuit breaker, and you guessed it. My work disappeared. Only the beginning of the book remained on the floppy disc. I had to rewrite almost the whole thing.

These days I have a cloud backup besides backing up my work to a thumb drive, emailing files to myself, and having my files in Calibre. Even with all the backups, when the black screen of death appears on my monitor without warning, there is that feeling of loss. One time the screen was black with a bright yellow frowny face. The computer had died. Thankfully with the cloud backup I was able to retrieve all my files, but the not-so-fun part was having to either get a new computer or hard drive. Then the software and files had to be loaded to the new device. Sometimes that can take a couple of days. If I have a looming deadline that can be troublesome. But I do have an old computer that I can fire up for such situations.

Besides a computer, I have a tablet and a phone. These devices are backed up to “the cloud” even though I don’t keep anything very important on either of those devices. The main thing I would lose there are all my contact phone numbers, the numbers I used to have written in a little book.

The interesting thing about the advancement of technology is how quickly it changes. Since I have received the rights back to my books originally published by Harlequin Love Inspired, I have had to update the technology in the books before I reissued them. I had to get rid of flip phones, although it seems some are coming back. I had to update my characters’ thinking. Instead of making notes with paper and pencil, they would type them into their phones or instead of making a call, sending a text. No more answering machines, cassettes, or even CD players.

These are the oldest of my Harlequin Love Inspired books that I have reissued with new covers and new titles. These are the books in the Pinecrest series. You can find out more about them by clicking the link. 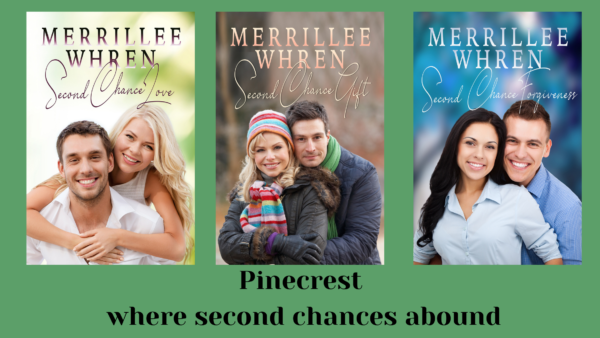 I will give away an ebook copy of the first book in my Pinecrest series to one person who leaves a comment. I will draw the winning name on April 1, 2022 at 9PM MST.