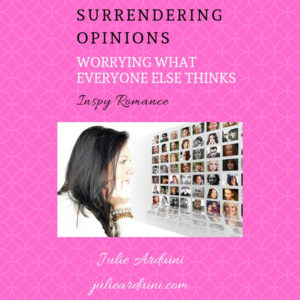 February! I saw a meme that joked that January was the longest 547 days they’d ever seen. I can relate! We had one storm with a foot of snow. The Polar Vortex touched down in Ohio, and we saw temps as low as -14, with -27 wind chills. I’m ready for a change!

It’s not just the weather that is transitioning, but my projects are changing, too. I’ve been working with my teen daughter on a series for females of all ages that contains a romantic thread, but isn’t my main genre, romance. Although we have one more book to write, we’ll do that in the summer. Now I am finally able to give all my attention to my six book series on Surrendering Opinions.

The premise of the series revolves around sextuplets who stay in the spotlight because of tragedy. Their upbringing involved a community rallying around to help, and of course, anytime people are involved, everyone has an opinion. By the time these siblings are young adults, they have a lot of people watching and speaking into their lives.

Each sibling will have their own book, and of course, a romance full of conflict. Because they are Christian books, they are romances with a message. Each story will take the hero and heroine through their surrender journey where they have to let go of their opinion conflict and find freedom in Christ.

Book 1, Anchored, features the oldest sextuplet, Jordyn Bell Collins. She’s strong, take-charge, and thrown into the unexpected when she’s told she’s co-anchoring the new morning show at her local television station. This wasn’t in her carefully calculated career plan, nor is working with the equally driven and way-too-serious co-anchor, Spencer Hart. Jordyn’s plate is full enough managing her siblings and their chaos, watching out for her father and protecting them all from any further pain. Can Jordyn let go of her need to have a say in everything and let God work through those she loves? Ah, it’s fun figuring it out! 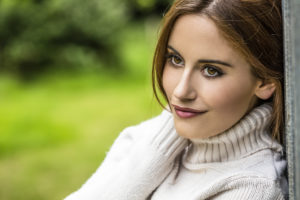 As I’ve plotted these books out I started wondering when it comes to opinions, would there be enough conflict to carry through six books? As you scroll through your Facebook feed I’m sure you’ve seen the negativity and division. And in the sextuplets, they bring a lot of baggage into their stories. As those plots unfold, I can share this much—the root of their surrender rests in the truth they are tied to what people think. To the point of it being a burden they have to let go of.

Caring what people think. Boy, can I relate, and it’s kicked at my own romance with my husband. I’ve often let fear hold me back because I worried how others would see me. Those fears have caused conflict, and I’ve had to surrender more than once. My husband has been great at keeping me accountable because he’s lovingly called me out wondering if I’m driven in that thing by faith or fear of what others would think. I remember almost saying yes to events when I was already overwhelmed because I didn’t want people to think I was lazy. I didn’t want to let anyone down. It was my husband who reminded me if I was driven by what others think, I wasn’t acting in His will and most likely I was robbing the real person God had in mind for that activity or event. I’ve learned a lot from those things.

My sense is that struggle isn’t just mine, so I’m prayerfully writing Anchored believing not only will readers find an entertaining romance, but also leave wanting to surrender their fears and find freedom in Christ.

How about you? Do opinions and fears of what others think drive you? My prayer is that you go to God with it and exchange that burden for freedom in Christ. I’m rooting for you!