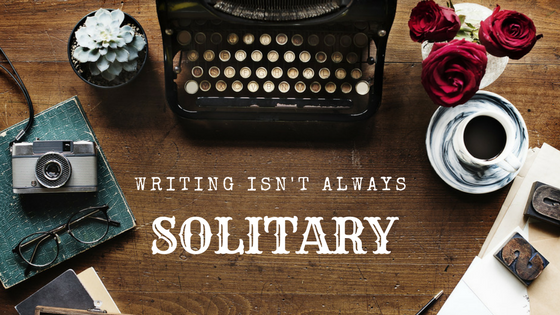 It feels like people are often saying that writing is a solitary pursuit. And, indeed, we often get a mental picture of an unkempt man or woman, typing madly at a machine like the one picture above darkness all around them except for the single beam of light from a desk lamp. The classics, of course, seem to highlight the solitary nature of writing. Consider Emily Dickinson up in her attic (or was it a garret?), penning depressing lines that all fit to the tune of the Gilligan’s Island theme song. Or Henry David Thoreau out by his pond ruminating about all manner of things that the average high school student doesn’t care about. Now, obviously, I picked to things of which I am clearly not a fan (please don’t hate me). I’m sure there are books I’ve loved that were written in solitude, but I tend to think it’s more accurate to paraphrase John Donne — “No writer is an island.”

Perhaps it’s more true today. The Internet, for good or for ill, has shrunk the world. I love the fact that here at InspyRomance we have commenters from all over — Australia, Argentina, Canada, and so many other places. Our bloggers are internationally diverse as well, coming from places like England, Australia, Canada, and South Africa (I don’t think I missed anyone in that lineup, but if I did, I apologize!) And, thanks to the Internet, no writer has to be alone unless they want to.

We don’t even have to work alone.

Over the last year, I’ve been thrilled to be a part of the Arcadia Valley Romance series. In February, we officially enter the final round of novels in the series. I’m sad to see this collaboration coming to an end. It’s been exciting to spend time chatting with the five other authors in the group, forming our town, finding ways for our characters to interact, and generally sharing the writing life with one another.

My final installment in the series, Donuts & Daydreams, will release March 13th. If you’ve been following along with the Baxter family, yes, Jonah finally gets his chance at love. If you haven’t been following along, the book pictured here on the left is a compilation of novellas that kicks off all six series set in Arcadia Valley. Romance Grows in Arcadia Valley is available for free on all e-book platforms (and there’s also a very fat paperback if you’re more inclined in that direction. But it’s not free.)

Last year seems to have been the year for collaboration, because in addition to Arcadia Valley, I was part of two boxed sets. Now, boxes tend to have a little less interaction than a series where there’s going to be overlap with characters and the town, but there’s still a good bit of interaction–enough that I never find life to be particularly solitary when I’m part of an upcoming box set.

This year, in addition to finishing out the Arcadia Valley series, I’m part of the Tuscan Legacy series Marion introduced on Saturday. I just completed my contribution to the project, and I’m very excited for y’all to get a chance to know my characters. Our little Tuscany Facebook group is always hopping–some days I look at my notifications and realize I need to come back when I actually have time to be there instead of trying to catch ten seconds between helping kids with their schoolwork.

I’m also a member of four different online writer’s groups where we can chat, ask questions, whine (cause let’s be real, sometimes you just need to whine to a group of people who get it), and support one another.

Best of all? I love the fact that I have a lot of different ways to interact with readers. All of you lovely InspyRomance readers are so fun to chat with in the comments. Then there’s my Facebook page and the special group I have for super fans who want to help me spread the word about my books.

If nothing else, I think all the opportunities for interaction and community will help us avoid churning out another ream of poetry to sing to TV theme songs and more navel contemplation than is healthy. ;) I think that’s a good thing.

What’s your favorite way to interact with authors and other readers?