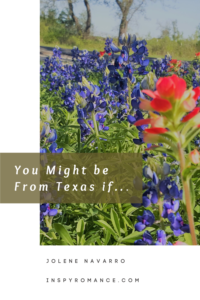 If you’ve been around you know I’m proud to be a 7th generation Texan. Yes, my family came down before we were a state, claimed land, built a community and helped gain independence from Mexico. But that’s all history.

Texans tend to be vocal about their pride of being Texan. Even newly planted Texans have bumper stickers and t-shirts that say “I wasn’t born in Texas, but I got here as soon as I could.”

All of my books are set in Texas. I have some in the Hill Country and a new series on a ranch along the Texas coast.  The Cowboys of Diamondback Ranch started with The Texan’s Secret Daughter. The next one out is The Texan’s Surprise Return. It will be in Walmart around October 15. The third, The Texan’s Promise is an Easter story and will arrive March 1st.

The Cowboys of Diamondback Ranch

I love this series. Texas is what made the De La Rosa family the strong stubborn people they are. Texas is a character, just like any good setting should be.

Coming from Texas there are just some things I know without question. If you from another area I want to know some of your unspoken rules or “understandings.”

What brought this to mind was another author asking about BBQs in the south. I thought it would be fun to list some “facts” about Texas that might not be understood elsewhere.

1. You have at least one picture of bluebonnets in your family album. Really people, you need to be careful sitting your kids in the middle of that beautiful patch of wildflowers…snakes like to hang out there.

2.. If you are in Texas and want to order hot tea or unsweetened tea…you have to be upfront about this. In Texas when you order tea it will be delivered with a smile, lots of ice and sugar brewed right in. 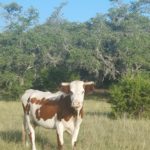 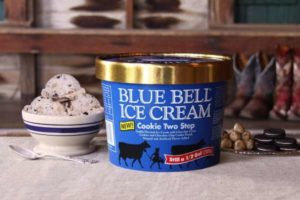 If you are in Texas that is your Ice Cream and no one better mess with it.

5. BBQ – the topic that got me started on this. When you get invited to a BBQ or you’re going to eat BBQ it involves a huge pit where they smoke big slabs of meat. Brisket being number one, but it can include chicken, sausage or turkey. Never hamburger or hot dogs. That is just grilling outside.

6. Speaking of BBQ it is a food group in Texas along with Tex-Mex and Chicken Fried Steak. 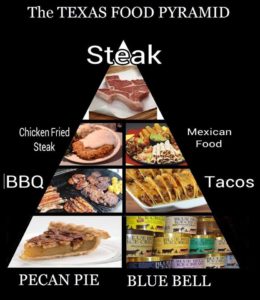 7. Whataburger is another main food source and I think just about every kid at one point thought it was Waterburger. You can’t keep a Texan away from their Whataburger – even during extreme weather. 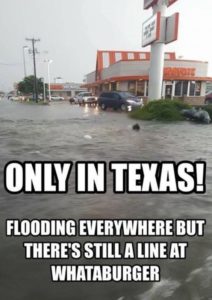 We love our What-A-Burger

8. In Texas weather is an extreme sport. And we say things like “It’s not the heat it’s the humidity.” Or “You think it’s hot now wait until August.” It reads more like a time but then in a week, it could be dipping into freezing then going back to the 90s. 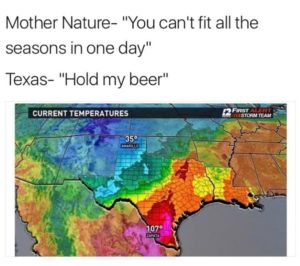 Weather is an Extreme sport in Texas

9. On the topic of weather, I think it’s common knowledge that we shut down if a snowflake appears. We just don’t get snow often enough to not be awed by it. 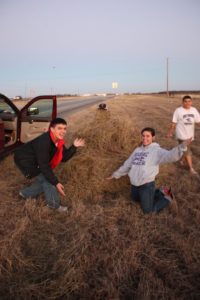 No white Christmas in Texas so a Hayman it is.

One Christmas we ended up on the side of the road with a second flat on Christmas Day. As we waited for my husband to get back from Walmart with a new tire, my kids built a “snowman” in the hay.

10. Some say that Texas doesn’t have four seasons. That’s not true. We have Summer. Baseball season. Football season and basketball season. For a bonus, we have Hunting Season…we have five.

11. If you hear a Texan “fixin’” to do something – nothing is broken. They are going somewhere. It doesn’t make sense but it’s true.

12. Texans are raised to help the English language be clear…when making you a plural we say y’all – which is short for you all. The proper use of you as a singular and plural is just too confusing. Then there is the plural possessive y’all’s.

13. Growing up in Texas for the first 8 or 9 years I thought there were only two colleges to pick from. You had to be a Longhorn or an Aggie. I had no idea what an “Aggie” was so I picked the Longhorns. LOL 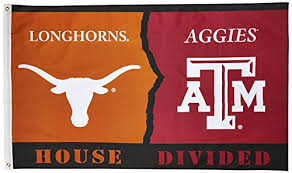 Are you a Longhorn or Aggie?

14. The last one I’m going to bring up is one I disagree with. Every time I see a This-is-how-Texans-do-it list – I see this: “It’s not chili if it has beans in it.”  I’m not sure who decided this, but it is wrong. My family has always put beans in our chili – black bean or pinto beans. I think my family is pretty Texan. So, some things are just stereotypes that can’t be trusted. Haha.

What about you? Do you have things that are regional? Only the people from your neck-of-the-woods understand that this is the only and right way to do it?

Maybe you’re from Texas and disagree with some of my list. Where do you stand on the chile/bean debate?

Tell me were you’re from and something your people are proud of.

If you leave a comment about your state I’ll enter your name for a random winner of my little slice of Texas. You can win an early copy of The Texan’s Surprise Return.